The fetish of 'culture' in Romanian post-socialist society

ICR is the Romanian Institute of Culture. Its branches in important capitals of the world (London, Paris, Tel Aviv, Istambul, New York) are important sources of representation for Romania, but also of outcome for Romanian contemporary artists. Through ICR, Dan Perjovsky exhibited at MOMA for example...

After the new government in power decided that ICR should be moved from the tutelage of the presidency, under the tutelage of the Senat/ Parliament, 'workers in the cultural field' in Romania and representatives and members of civil society started protests.

Some of them initiated a petition, saying that they do not sustain the present director of ICR, Horia Roman Patapievici, but that they do not agree with the way the change was done through ordonanta de urgenta. (petition Mungiu, Parvulescu).
Even so, in the following days, a march and a protest in front of ICR affirmed much more the support for Patapievici, than anything else. 'Marsul papioanelor' was a tribute to Patapievici himself and to the 'high ellitist culture' of Romania.

The following link to an article on Modernism.ro summarises the attempts that the Romanian cultural ellite, and their suporters all over the world, did in trying to stop the decision of the Government to change the present director of ICR, Horia Roman Patapievici.
By making a summary of all the letters of support that the present direction of ICR has received, the text presents in a certain way the kinship/ lineage of all the suporters of the Romanian high cultural field.
To me this text is very problematic. On the one hand it shows the support Patapievici received from 'big names' in the field of culture, and on the other hand, how good PR organisation he used in asking for this help all over the world. After eight years in power at ICR, the text transmitted to me that Patapievici really wants to keep his position.
An interesting annalysis about the relation between culture and politics (in both the decision of change as well as in the protests) could be found in more articles on Critic Atac, as well as in the comments posted by some of the readers of this articles, for example: http://www.criticatac.ro/17226/despre-icr-patapievici-societatea-civil-politic-citeva-chestiuni-de-principiu/
Patapievici was politically named by the president Basescu and played a very important political role in the last presidential campaign when, in an interview for a Spanish newspaper (La Vanguardia), he denigrated on sexual issues the counter-candidate of Basescu. Knowing that the news was instantly diffused on Spanish media, and that so many Roumanians in Spain watch TV, the outcome of Patapievici's position is easy to guess. Basescu wan the ellections not with the suport of Romanians in Romania, but from the suporters of Romanains abroad. (A very important episode of the ellections in Paris, where another important cultural figure, Baconsky was ambasados, deserves further annalysis.)
Isn'it this politics?

Why certain institutions and people get so much support from so called 'civil society' and cultural workers in Romania? Was the field of culture opposed to any other fields in post-socialist Romania? Why 'cultural workers' and artists know to fight so well for their rights and intersts and so little for the rights of the Romanian society at large?

I believe that a research on some projects founded by ICR (before and during Patapievici in power) would be very useful in this discussion. : what kind of conferences, exhibitions and events did ICR organise. Who participated there, how the money were spent? What was the real impact of these events?

Education in the Expanded Field: Critical Pedagogy as Poetics in Contemporary Art

*** I want to devote this lecture to what I am calling “the expanded field of education in contemporary art” in the first two decades of the 21st century. I am guided by the fervor with which the art world has embraced, over the last decade or so, topics such as learning, education, pedagogy, teaching, research, and study as a critical practice, proposing either to work within institutions of education, or making education the focus of their work. These tendencies do not necessarily promote knowledge as a universal end in itself, on the contrary. […] United in their opposition to the political status quo; the failures of public education; and the consequences of neo-liberal capitalist economic policies all over the world, the artists I want to discuss here promote teaching and study as an open-ended and even “poetic” practice that would not be grounded in the manipulative pedagogy of Platonic dialogue with its predictable “learning outcome” (the battle cry of the Bologna process): education, they argue, means unpredictable adventures in the realm of knowledge.

*** Sven SPIEKER teaches in the Comparative Literature Program; the Department of Art and Art History; and the Department of Germanic, Slavic, and Semitic Studies at the University of California, Santa Barbara. He specializes in European modernism, with an emphasis on the Eastern European avant-gardes, contemporary art – with an emphasis on Eastern Europe -, and critical theory. Spieker has published on topics ranging from the Russian avant-garde (Malevich, Rodchenko, Dziga Vertov) to late 20th-century art in Russia and Western Europe (Ilya Kabakov, Boris Mikhailov, Marcel Duchamp, Martin Kippenberger). His essays and articles have appeared in German, Russian, Swedish, Polish and English. Spieker has organized several international conferences (most recently, The Office in the Studio: The Administration of Modernism at the University of Jena, Germany; and in 2011 a roundtable on critical curatorship in Eastern Europe at the College Art Association Meeting, New York City. Participants: EmiliaKabakov; Cosmin Costinas; Piotr Piotrowski; Victor Misiano; Karel Cisar; Lolita Joablonskiene). Spieker's latest book publication focused on the archive as a crucible of European modernism (The Big Archive, MIT Press, 2008). Spieker is the editor of ARTMargins (www.artmargins.com
scrisă de Gabriela NC Niciun comentariu: 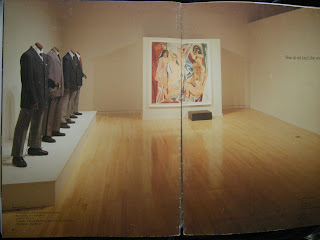 I particularly think that discussions which have anthropological background applied to the museum world are very useful. Some of the reasons for this assumption are the following:
a. anthropology is reflexive and critical at its own discourse and making (also as a response to its collonial non-reflexive past) - and museums very often tend not to be reflexive. Why so, it is an interesting topic of discussion.
b. anthropology works with scale - personal stories, options, realities; museums tend to generalise.
c.both anthropology and museums deal with truth.
d.in relation to that, both deal with representation/s of partial truths.
e. it was also discussed the role of art interventions in ethnological or anthropological museums - and its playful, critical point in addressing issues that employeed researchers and currators in museums are not allowed to
f. etc - this was by far the most interesting part!

being said that, I attach two images from a bok with the installation of Fred Wilson, an artist who specifically works and criticises the museum field. 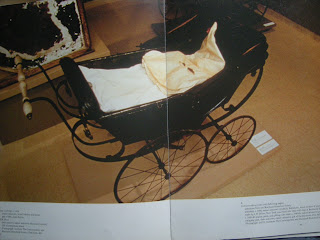