That Tourism is one of the biggest industries in the world, is not a new thing to say. It has its peculiarities, though. It is based on a major economic inequality: some people have money to travel, some others have barely some to cope with living, and consequently encounter tourists (generally) with a lot of appreciation and happiness.
From this economic and affective juxtaposition some artists manage to draw subjects of inspiration.
Marcus Coates is one of them. I am going to write about two of his projects. One is entitled the Trip, and was commissioned by the Serpentine Gallery in London as part of the project Skills Exchange. It deals with the artist' work for outpatients as St John's hospice asking the question 'What can an artist do for you?' Those who responded suggested various things, among which a trip to the Amazon. Coates did the trip, filmed part of it, screened it and talked to the people who commissioned it - about this journey that he did for them, about fears and strengths, about how much you can push yourself, about meeting the Amazon people through an intermediary - but still feeling great, about storytelling.
The Interview and long conversations between the artist and one of the patients in the hospice were touching in their simplicity and curiosity: what those people were eating, the effects of entering in contact with the white men, etc. At the end of the interview there is an artist's note: That the person who commissioned this trip died not long after this interview. In our last conversation we continued to talk about our trip. He said that he often went down the river into the jungle when de needed to.


The other project of Marcus Coates is the following performance he did in front of an audience of old people living in a block of flats: Trip to the Lower World.
https://www.youtube.com/watch?v=FAUWVKxiG2s


The second artist I want to write about is Martin Parr's collections of postcards. Some of them were exhibited in Barbican's exhibition: Magnificent Obsessions: The Artist as Collector.
His books with photos taken by him are just great. Mass Tourism, Small World (a critique of  or From Home and Abroad is one of them.
http://www.martinparr.com/


'Leisure, consumption and communication are the concepts that Martin Parr has been researching for several decades now on his worldwide travels. In the process, he examines national characteristics and international phenomena to find out how valid they are as symbols that will help future generations to understand our cultural peculiarities. Parr enables us to see things that have seemed familiar to us in a completely new way. In this way he creates his own image of society, which allows us to combine an analysis of the visible signs of globalisation with unusual visual experiences. In his photos, Parr juxtaposes specific images with universal ones without resolving the contradictions. Individual characteristics are accepted and eccentricities are treasured.
(...)
Martin Parr sensitises our subconscious – and once we’ve seen his photographs, we keep on discovering these images over and over again in our daily lives and recognising ourselves within them. The humour in these photographs makes us laugh at ourselves, with a sense of recognition and release.' Thomas Weski 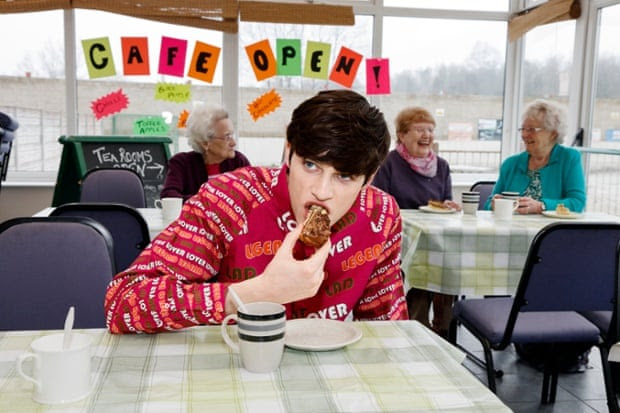