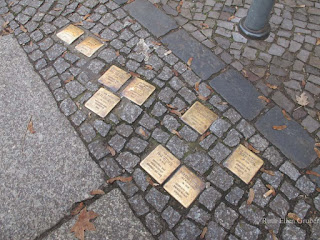 The German artist Gunter Demnig began his Stolperstein project in the mid-1990s as a guerrilla art installation in Berlin. It has grown enormously, and now it is arguably the world’s largest participatory counter-memorial. Stolpersteine -‘stumbling stones’ – are 10 cm x 10 cm brass plates affixed to cobblestones, bearing the names and dates of birth, deportation, and murder or survival of victims of Nazi Germany; they are installed in the pavement/sidewalk in front of the ‘last residence of choice’ of the person(s) being commemorated. There are now over 70,000 Stolpersteine located in 24 countries. The installations are organized through a combination of individual, state sponsored and grass roots efforts.

The scholars Ruth Mandel and Rachel Lehr are carrying out multi-sited ethnographic research about this and other site-specific artists’ responses to the Holocaust. They describe here what they are finding, starting in Norway where the traveled 5,000 km with Demnig, observing and even taking part in installation ceremonies. Mandel and Lehr attended many installations–not only in Norway, but Austria, Hungary, and Germany (we hope to attend many more). At all these, people treated the stones with great reverence. The improvised installation rituals we observed took many forms—religious, secular, simple, elaborate; but all seemed to share a sense of the sacred—even if momentary. Flowers, candles, stones, and photos of the deceased, were arranged around the Stolpersteine, and were well-documented. This was a striking contrast with the local landscape directly following an installation. Afterward, the stone simply became a small glint interrupting the grey stones surrounding it, offering passers-by a chance to stumble across it, bend down, read, and reflect—or to pass on by.

Some of the questions of the two researchers are:

For example, why are there so few stones in Poland—despite the artist’s offer to donate and install them gratis?  Why have some municipalities  banned their installation? Why do some Jewish leaders opposed them? Do they pose threats? How do different generations of descendants respond? How do local people interact with them?
These are some of the questions that will be guiding the next stages of our ongoing research

There are two things I find really inspiring about this project. First that it allows small gestures and material presences of memorisation to weave into the social fabric of contemporary Europe. Second, that it prompts contemporary stories about Europeans reactions to these acts of memorialisation. Some of them are really disturbing - you would not imagine people still having something 'against' the victims...

In Romania, Bulgaria, Serbia and Hungary, there is a lot of potential into 'planting' these stones into the pavement of cities and villages, for the many victims...
The artist, in his website says that the victims were: Jews, Sinti, Roma, Jehovah’s Witnesses, homosexuals, mentally and/or physically disabled people, those persecuted for their political views, their sexual orientation, forced laborers, people persecuted on the grounds that they were ‘asocial’ such as homeless people or prostitutes—anyone who was persecuted or murdered by the Nazi regime between 1933 and 1945.